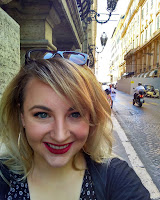 At the November EPS national annual conference in Denver, Colorado, Stephanie Nicole Nordby was awarded ‘best paper’ for the 2018 EPS Graduate Student Prize. The prized paper, “Divine Predication, Direct Reference, and the doctrines of classical theism,” was also presented, in part, at the annual conference.

Currently, Stephanie is a scholar with the Logos Institute, in which she is pursuing a project that aims to “articulate a plausible way of understanding descriptions of God in Scripture that integrates recent work in biblical studies, theology, and philosophy of language.” With Jonathan Rutledge, she is also co-host of Pogos, the podcast of the Logos Institute [iTunes; Soundcloud], and she is the lead editor for the Institute’s blog, BLogos.

Enjoy the following interview with Stephanie, both as a snapshot into her overall project and as a glimpse into her sense of calling with her scholarship.

I’ve always been interested in big questions, even as a child. It wasn’t until I met my spouse, Kevin, that I began to see the value of analytic philosophy. Kevin had majored in philosophy at Chapel Hill, and it became obvious to me that his training as a philosopher contributed to his ability to think critically about things that mattered to me as a Christian: how to reason about God, interpret Scripture, and think theologically. As a result, I decided that I wanted to be trained in philosophy before I pursued my first passion, biblical interpretation. As it turned out, I fell in love with philosophy, too, along the way. The interests you mentioned are a natural marriage for me: Philosophy of religion is a field in which scholars consider what reason can tell us about God; philosophy of language looks at the relationship between language and what we know and what exists; and analytic and exegetical theology is the application of analytic philosophy and biblical exegesis to theology.

With your studies at the Logos Institute, what are the core issues you are trying to address with your research and writing?

Right now I am looking at a particularly interesting movement in New Testament studies, the “Early High Christology Movement.” Scholars like Richard Bauckham, Larry Hurtado, and N.T. Wright (just to name a few) made significant contributions to how we interpret the beliefs of early Christians and the authors of the New Testament. Importantly, they contend (against many in the academy) that many of the early witnesses testify to belief in a divine Jesus. However, the way in which these Christological beliefs are articulated in the early texts is significantly different (at least, superficially) from many of the Christological claims generated by the Church Fathers and historical theology. My work tries to tease out the philosophical and theological dimensions of this early high Christology in order to get a better handle on how we can best understand the claims and beliefs in the earliest witnesses to the divine Christ.

What is the theory of divine predications and its philosophy of language that you seek to advance?

I subscribe to a univocal theory of divine predications, an extremely unpopular view among philosophers and theologians. (Although I have some excellent bedfellows like John Duns Scotus!) That is, I hold that at least some of the words we use to describe God apply to him directly, and not only by means of analogy or metaphor. Similar to philosophers like William Alston and Paul Helm, I believe that a Kripkean theory of direct reference can help us understand how our finite, human capacity for language can enable us to univocally apply predicates to a holy God. What makes my view unique is the way in which it relies on religious experience and ordinary accounts of how we speak about things we don’t understand. An important aspect of my view is that theological language is actually not that different from our language about other real phenomena that we don’t fully understand, like the frontiers of science.

What do you see are the benefits and challenges to your view?

One of the biggest challenges to my view is that it forces you to take religious experience extremely seriously. The evidential merit of religious experience has faced some major challenges in the last century, and there are many philosophers and theologians who think that religious experience is either empirically useless, or else something that cannot generate meaningful speech due to the underlying epistemic limitations of religious experience. This is a challenge I’m willing to take on, though, because I think a theistic realist must take religious experience seriously. I think my view has several benefits. (Of course—that is why I’m attracted to it!) For one, it sidesteps a host of problems related to analogical predication, including apophaticism. Second, it shows how we can engage in meaningful theological speech while holding to many key doctrines of the Christian faith, such as belief in God’s transcendence and holiness. Third, I think it reflects much of how the Scriptures and early church seemed to think and talk about Jesus and God in that it treats God like he is available to human perception and speech acts, while also affirming his otherness.

How do accounts of first-person vs. second-person vs. third-person knowledge figure into your theory?

In one sense, first-person knowledge (or, to avoid some of the technicalities that can come with terms like ‘knowledge’ in epistemology, it might be better to speak about experience or perception) is very important for my theory. That is because (as I mentioned above) I take religious experience to be very important when it comes to the metaphysical grounding of the words we use, especially when it comes to referring to and naming God. However, as I mention in my EPS paper, the way in which we arrive at our understanding about God and the world he created is through narrative. The Scriptures, for example, often make use of stories instead of more formal theological propositions to communicate ideas about God. Linda Zagzebski points out that some objects of human experience, like the moral features of the universe, seem to be more readily understood or described when exemplified in story, and Eleonore Stump makes an argument that there is something called “second-personal knowledge” that is conveyed through narrative. I combine these positions to argue that narrative opens the door to knowledge of things that cannot necessarily be defined, or at the very least, defined in full; as a result, we can engage in meaningful speech about God’s holiness, transcendence, etc.

How have you found the works of William Alston, Eleonore Stump and Linda Zagzebski to be significant to your philosophy and theology interests?

These three philosophers (and I would add Nicholas Wolterstorff as well) have been incredibly influential to my work. William Alston is best known in philosophy of religion circles, perhaps, for his work on religious experience; however, I’ve found his work on religious language (most of which can be found in the collection of essays Divine Nature and Human Language) to be the most interesting of his work. While I disagree with his account of concepts, I think his work on reference was groundbreaking, especially in light of the theological climate at the time it was published. Eleonore Stump is brilliant on so many fronts, but perhaps what I most appreciate about her work is the depth of her knowledge of Scripture and the sensitivity with which she approaches the complexities of religious texts. This can be difficult to find among analytic philosophers, but Stump never fails to bring fresh perspective, such as the one I mentioned in your prior question about second person knowledge, to her treatment of the Bible. Nicholas Wolterstorff is another major influence; Divine Discourse is the first book I recommend to colleagues interested in the philosophy of Scripture. Linda Zagzebski, of course, is my most significant influence, as I had the good fortune to study under her supervision for my PhD in philosophy. Linda’s recent Exemplarist Virtue Theory is a magnum opus, in my view; in it, she deftly combines insights from ethics, metaphysics, and social sciences to contribute a truly original virtue theory. However, it was her earlier work, Divine Motivation Theory, that originally stimulated my thinking about religious language. In it, Zagzebski observes that the Imitatio Christi is underrepresented in Christian ethical traditions, and she argues for a theory of ethics that begins with considering Jesus as the divine exemplar of perfect moral features. This triggered my thinking about how we perceive, understand, and talk about Jesus’s divine features. Of course, her work on direct reference had a very influential role as well. Presently, I am lucky enough to be supervised by Oliver Crisp as I complete my second PhD in theology. I had long admired Crisp while studying philosophy, as he is a capable philosopher in addition to being a trained theologian, so his work is useful to me as a model of how to combine my analytic sensibilities with my theological project. More recently, though, I’ve been gaining an appreciation for how Crisp is a key voice for a sophisticated and traditioned Protestant theology: He manages to articulate profound reflection on theology that is accessible to the 21st century church, while still finding and preserving the best insights from the Christian tradition.

Given your interests and understanding of the relevant literature, what do you recommend for future work, especially at the intersection of philosophical theology and how we read scripture and communicate about how we encounter God?

I would like to see more philosophers and theologians engage with questions about the canon and interpretation of Scripture. There was a series of excellent works at the recent turn of the century by Richard Swinburne, Nicholas Wolterstorff, William J. Abraham, Paul Helm and Eleonore Stump, among others. These works, though, far from exhaust the issues that should be of interest to Christians. There is much more to be said about the authority of and objections to the canon, the meaning and nature of inspiration, and the process of biblical interpretation. Wolterstorff especially raises a host of questions about what exactly constitutes God’s speech in Divine Discourse. His arguments about appropriated speech could launch a thousand books about divine speech and speech in general! I am also very excited about the resurgence of interest in religious experience in philosophy, but I think there is more work to be done in theology and philosophy in this area. Importantly, I think that evidentialist critiques of religious experience should be reconsidered, and I’d like to see more philosophers and theologians draw on some of the interesting work on models and epistemology in philosophy of science and philosophy of mind/cognitive science.

To enjoy more work on philosophy of religion issues, become a subscriber to the journal, Philosophia Christi, or become a member of the Evangelical Philosophical Society [includes annual print subscription to the journal], along with many FREE articles at the EPS website.