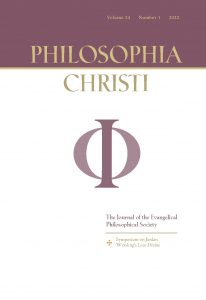 Get immediate digital access to the latest issue of Philosophia Christi (vol. 24, no. 1) by subscribing today via the Philosophy Documentation Center. In fact, for as low as $25/yr, your digital only subscription to the journal includes the current issue and the entire archive of Philosophia Christi articles, philosophical notes, and book reviews since 1999 (over 1100 items to search, browse, and access)!

From the latest issue, enjoy the following preview!

Introduction to a Symposium on Love Divine

In this essay, I introduce the symposium on Jordan Wessling’s book, Love Divine: A Systematic Account of God’s Love for Humanity, by discussing its origin as a book panel, providing the context for the significance of Wessling’s contribution, and previewing the essays that follow.

A Précis of Love Divine: A Systematic Account of God’s Love for Humanity

To set the stage for the symposium on my monograph, Love Divine: A Systematic Account of God’s Love for Humanity, I present the purpose of this manuscript and summarize its main themes and chapters. Additionally, to orient readers to the wider literature in which Love Divine is situated, I respond to recent reviews of Love Divine and mention some of the most significant challenges to the book raised so far by those not represented within the symposium.

One Hell of a Problem for Divine Love

For Love or Glory? A Response to Wessling’s Case for Amorism

In chapter 3 of Love Divine, Jordan Wessling argues against glorificationism, the view that God primarily created for the sake of his glory, and for amorism, that God created primarily out of love for creation. His arguments are based in both scripture and natural theology. In this paper, I offer reasons to think that Wessling’s arguments are not successful. I then suggest that we remain agnostic about God’s primary motivation for creating the world while still affirming that he was motivated by both self-glorification and love for creation.

Wessling’s treatment of divine love raises several questions for systematic consideration. My goal here is to articulate some of these questions and their rationale insofar as they relate to the Creator-creature distinction. I begin with the nature of “creaturely love,” with its material content and methodological contours in Wessling’s account. Then I move to questions about the Creator’s love with regard to divine aseity. Finally, I ask about the Creator’s relationship to creatures in the hypostatic union of the Son with a human nature.

I here respond to my interlocutors in the symposium on my book, Love Divine: A Systematic Account of God’s Love for Humanity. Addressing each of them in the order in which their essays appear within this symposium, I reply to the comments by R. T. Mullins, Keith Hess, and Ty Kieser.

In this paper, I investigate the merits of an argument in the philosophy of mysticism which, if sound, appears to have serious implications for our estimation of various Christian saints, mystics, and theologians and some of their most profound spiritual experiences. After giving an initial statement of this argument, I offer a (tentative) defense of the two main premises at play and conclude the argument is plausibly sound. Following this, I turn to a discussion of Nelson Pike’s important objection to this argument and contend that, while doubtless more interesting than commonly supposed, it ultimately falls short of the mark.

The Prohibitive Costs of Methodological Naturalism

The Resurrection of Jesus: An Engagement with Dale Allison: A Review Essay

In his latest book, The Resurrection of Jesus, Dale Allison states that, while he personally believes that Jesus resurrected, “the purely historical evidence is not, on my view, so good as to make disbelief unreasonable, and it is not so bad as to make faith untenable.” This review focuses on Allison’s discussion concerning apparitions, hallucination theory, mass hysteria, and pareidolia. While appreciative of various aspects of Allison’s work, this article points out various problems with Allison’s use of materials in other disciplines, a number of fallacies of reasoning in Allison’s analyses, and demonstrates that the best skeptical hypothesis against Jesus’s resurrection suggested by Allison is untenable.

In two books and several articles Philip Goff has developed a panpsychist theory. Recently, he has put forth a version which he calls cosmopsychism. Rejecting both perfect being theism (PBT) and physicalism, according to cosmopsychism, there is a unitary mind that is not only the cause of the universe, but in a sense is the universe. In this essay I critique Goff’s theory, arguing that it is not simpler than PBT, and that it fails to make important issues clear. I conclude that Goff’s theory is a version of theism but fails to be a plausible alternative to PBT.

Biblical Philosophy: A Hebraic Approach to the Old and New Testaments, Dru Johnson

The Compatibility of Evolution and Design, E. V. R. Kojonen