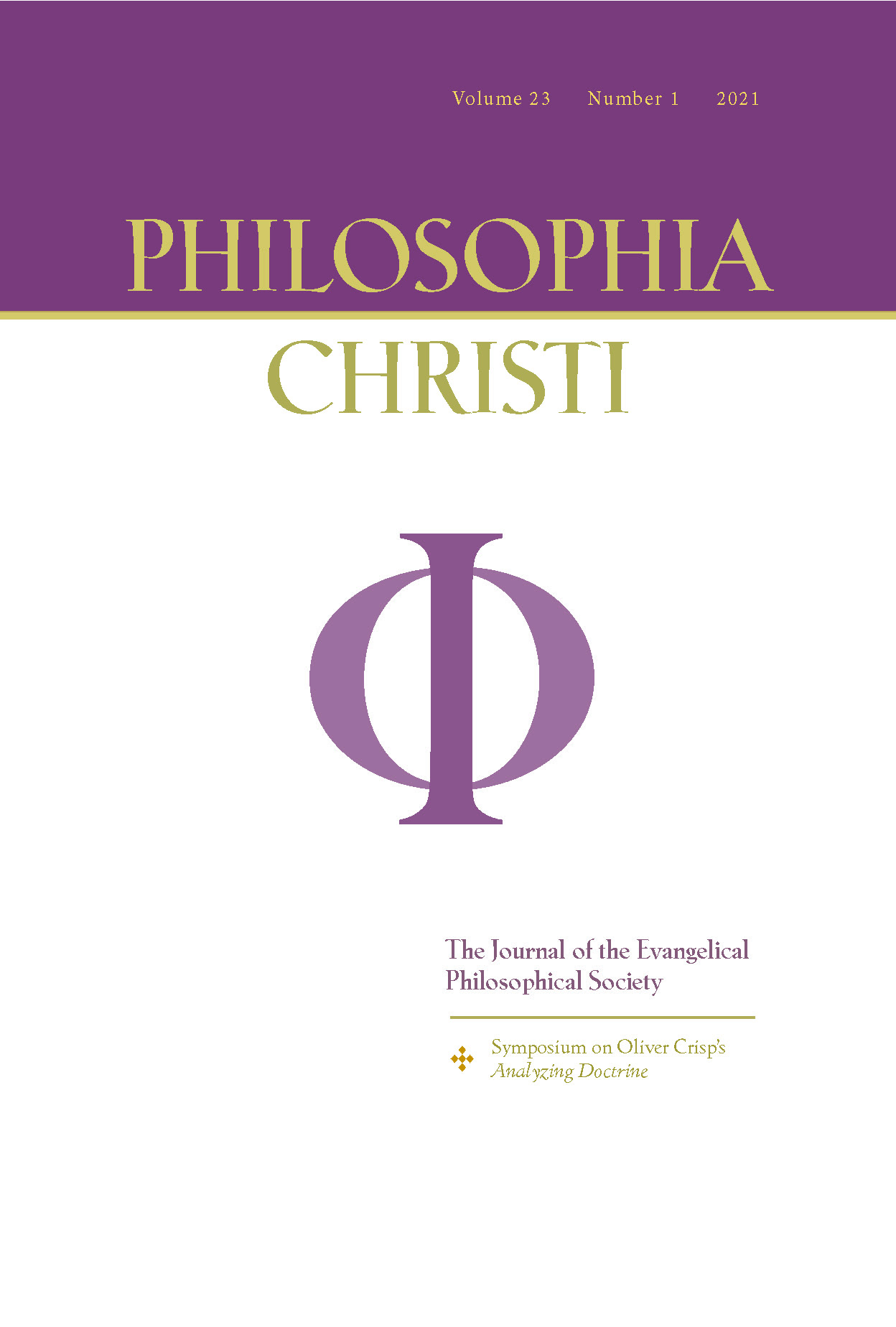 From the Summer 2021 issue of Philosophia Christi, enjoy a stellar symposium (guest edited by Christopher Woznicki) on Oliver Crisp’s Analyzing Doctrine: Toward a Systematic Theology. Below is a preview. Gain immediate digital access to the symposium (and over 1000 published items from the journal) by starting/renewing your digital subscription today via the Philosophy Documentation Center.

In this précis I introduce the topic of the symposium, namely, Oliver D. Crisp’s book, Analyzing Doctrine: Toward a Systematic Theology. I discuss the impetus behind the symposium, provide a précis of Analyzing Doctrine, and preview the various responses to the book given by his interlocutors. I conclude by highlighting some possible new directions for analytic theology.

This essay engages with Oliver D. Crisp’s parsimonious model of divine simplicity while offering a defense of a maximal account of simplicity. Specifically, I clarify (1) the way in with Reformed orthodox theologians, like Gisbertus Voetius, anticipate something like Crisp’s model, (2) that pure actuality is an explication, rather than an entailment, of the doctrine of simplicity, and (3) that the doctrine of simplicity remains consistent with epistemic modesty in relation to theological matters.

In Analyzing Doctrine: Toward a Systematic Theology, Oliver Crisp infers from a general principle concerning God’s providential care for the church that it is implausible that God would allow substantial error on the central theological promulgations of an ecumenical council. is conclusion is then used specifically against contemporary neo-monothelites, who consciously contravene the dyothelite teachings of the third Council of Constantinople. In this paper, I raise several doubts about the inference utilized by Crisp against these neo-monothelites, and I seek to point to a more promising manner of upholding the deliverances of the ecumenical councils.

As Oliver D. Crisp’s Analyzing Doctrine sets out the major moves of a future analytic systematic theology, this response worries about the lack of close attention to work of the Holy Spirit. It is argued that this generates an unhelpful (and unintended) tendency for key theological concepts to collapse into one another. First, the concepts of theosis, participation, union, conformity, and sanctification appear indistinguishable. Second, Crisp portrays monofocal attention to the union of incarnation, without equal concern for that additional complementary way that humanity is united to God, namely, the indwelling of the Holy Spirit.

In this essay I respond to my interlocutors in the symposium on my monograph, Analyzing Doctrine. Addressing each of them in the order in which their essays are printed, I consider and reply to comments by William Lane Craig, Steven Nemes, N. Gray Sutanto, Jordan Wessling and Joanna Leidenhag.

Please consider becoming a regular annual or monthly financial partner with the Evangelical Philosophical Society in order to expand its reach, support its members, and be a credible presence of Christ-shaped philosophical interests in the academy and into the wider culture!

How does one go about drawing anthropological conclusions from Christology?

One approach is to ask the question, “What account of human nature best makes sense of a particular account of atonement, X?”

In order to show the fruitfulness of this approach, Christopher Woznicki turns to T.F. Torrance’s doctrine of atonement. He argues that the account of human nature that best comports with T.F. Torrance’s doctrine of atonement is one in which human nature is an abstract universal that is instantiated by Christ and participated in by all other human beings.

Additionally, Woznicki suggests that this approach might be fruitful for drawing anthropological conclusions from other accounts of atonement.

The full-text of this paper is available for FREE by clicking here. It is part of an ongoing EPS web project focused on a Philosophy of Theological Anthropology.

The Evangelical Philosophical Society (EPS) is pleased to introduce a unique and ongoing Philosophy of Theological Anthropology project! Your contributions, readership, exploration and support are most welcomed. For more on this theme and Christian contributions to philosophy, become a subscriber – for as low as $25 per year! – to Philosophia Christi, the peer-reviewed journal of the EPS [all EPS members receive Philosophia Christi as part of their membership].

Inaugurated in 2018, The Philosophy of Theological Anthropology is an EPS web project devoted to the foundations and meta-themes of theological anthropology. Contributors seek to highlight a variety of new topics, which are at present underexplored, and fresh philosophical perspectives of older topics. This is an opportunity for philosophers and constructive theologians to explore foundational and innovative themes within theological anthropology from a philosophical perspective.

Topics of interest in this web series include areas of epistemology, metaphysics, Christology, and traditioned anthropology. We are interested in approaches that reconceive in fresh new ways the conditions and foundations for thinking about theological anthropology. This amounts to critical interrogations of commonly held assumptions in the contemporary theological literature on anthropology. We invite contributions that are extensions of previously published works as well as unique speculative pieces.

The present issue will contain topics on anthropology, philosophy of mind, imago Dei [broadly conceived], with the aim toward advancing the philosophical foundations and implications of a theistic anthropology.

Find this Project Interesting? See these other EPS Web Projects

Want to Contribute to the Philosophy of Theological Anthropology Project?

Submit a Proposal: Email a topic, thesis and description of the proposed paper (250 words max) to Project Editors Joshua Farris and Nathan Jacobs [see below]. They will help guide your proposal toward being a contribution of this web project.

Please consider becoming a regular annual or monthly financial partner with the Evangelical Philosophical Society in order to expand its reach, support its members, and be a credible presence of Christ-shaped philosophical interests in the academy and into the wider culture!

Since Thomas McCall first published Which Trinity? Whose Monotheism? Philosophical and Systematic Theologians on the Metaphysics of the Trinity in 2010 numerous papers have been written responding to his philosophical arguments against eternal functional subordination.

Among recent philosophical responses to McCall’s position a paper co-written by Philip Gons and Andrew Naselli and another by Bruce Ware stand out as the most significant. Gons and Naselli argue that McCall’s argument conflates the term “essentially” with “belonging to the essence.” Ware puts forth a reductio ad absurdum argument against McCall and shows McCall’s logic entails a denial of homoousios.

This paper enters into this debate by examining Gons and Naselli’s argument. It engages with recent philosophical literature dealing with the meaning of the term “essence” in order to show that their argument against McCall is unfounded.

The paper then turns to Ware’s argument to show that he has made a category mistake in comparing the property of being eternally begotten and the property of being functionally subordinate in all time segments in all possible worlds. Having critically examined these recent philosophical responses to McCall we see that McCall’s argument still holds up against its objectors.

The full-text of this paper is available for FREE by clicking here.